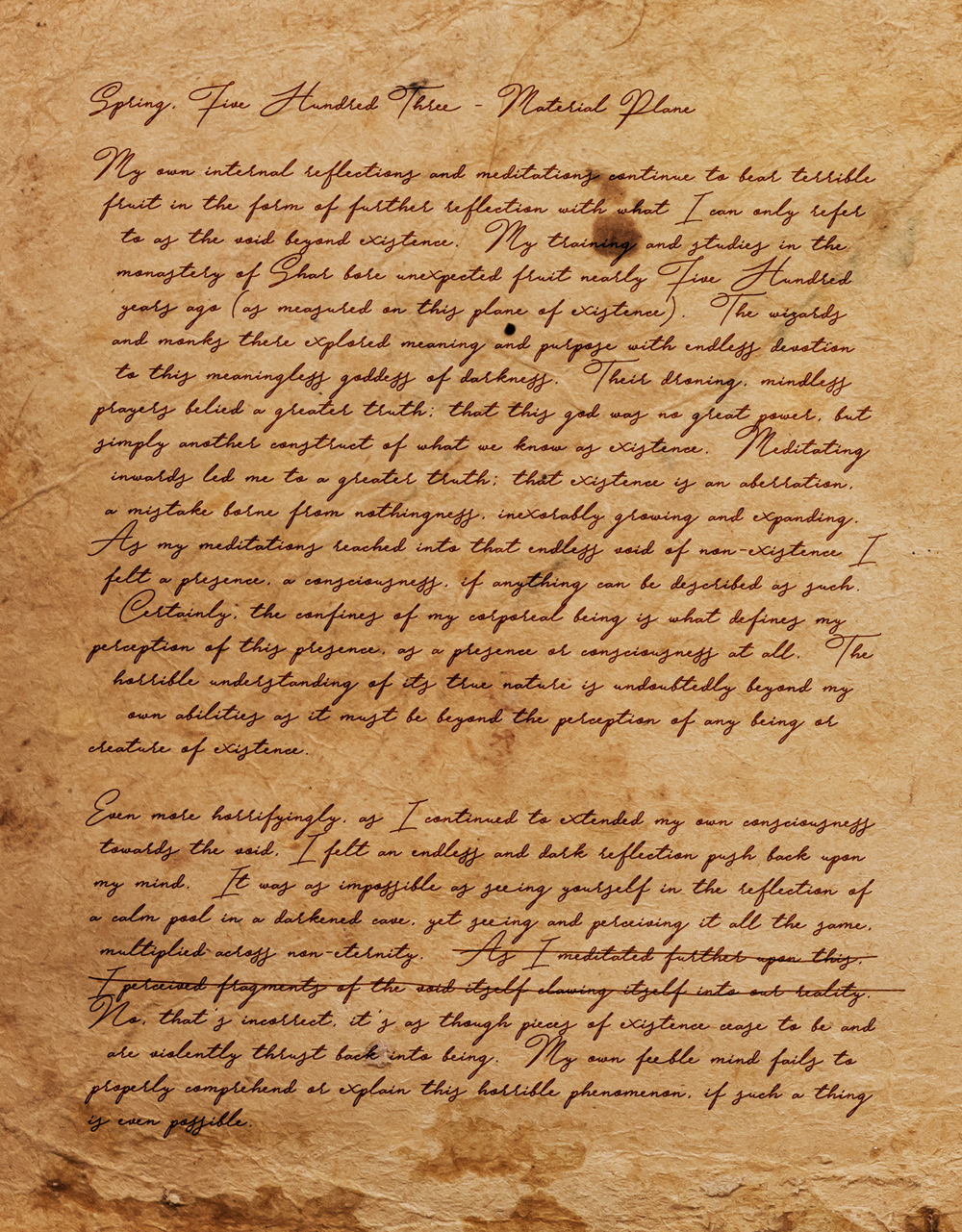 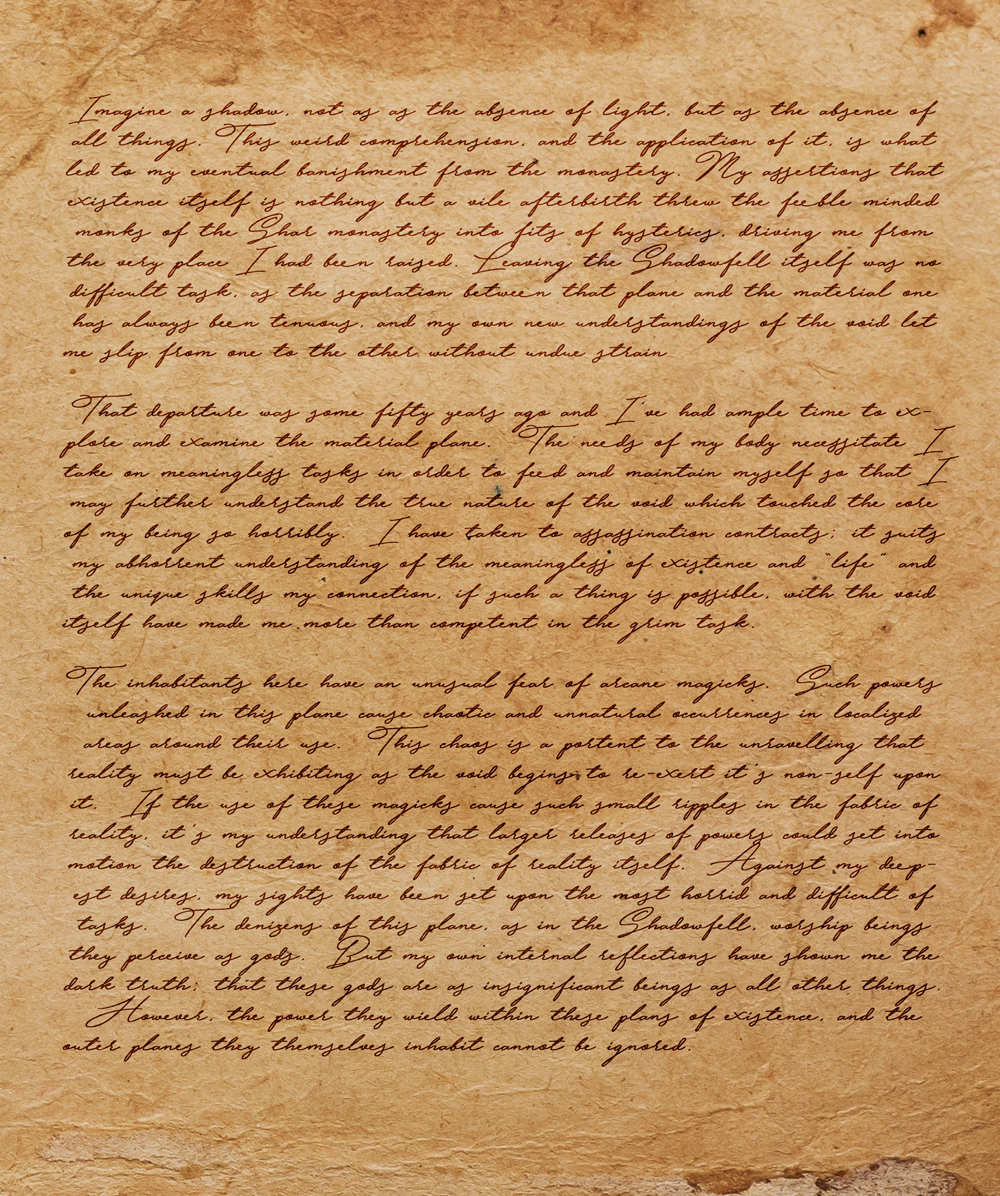 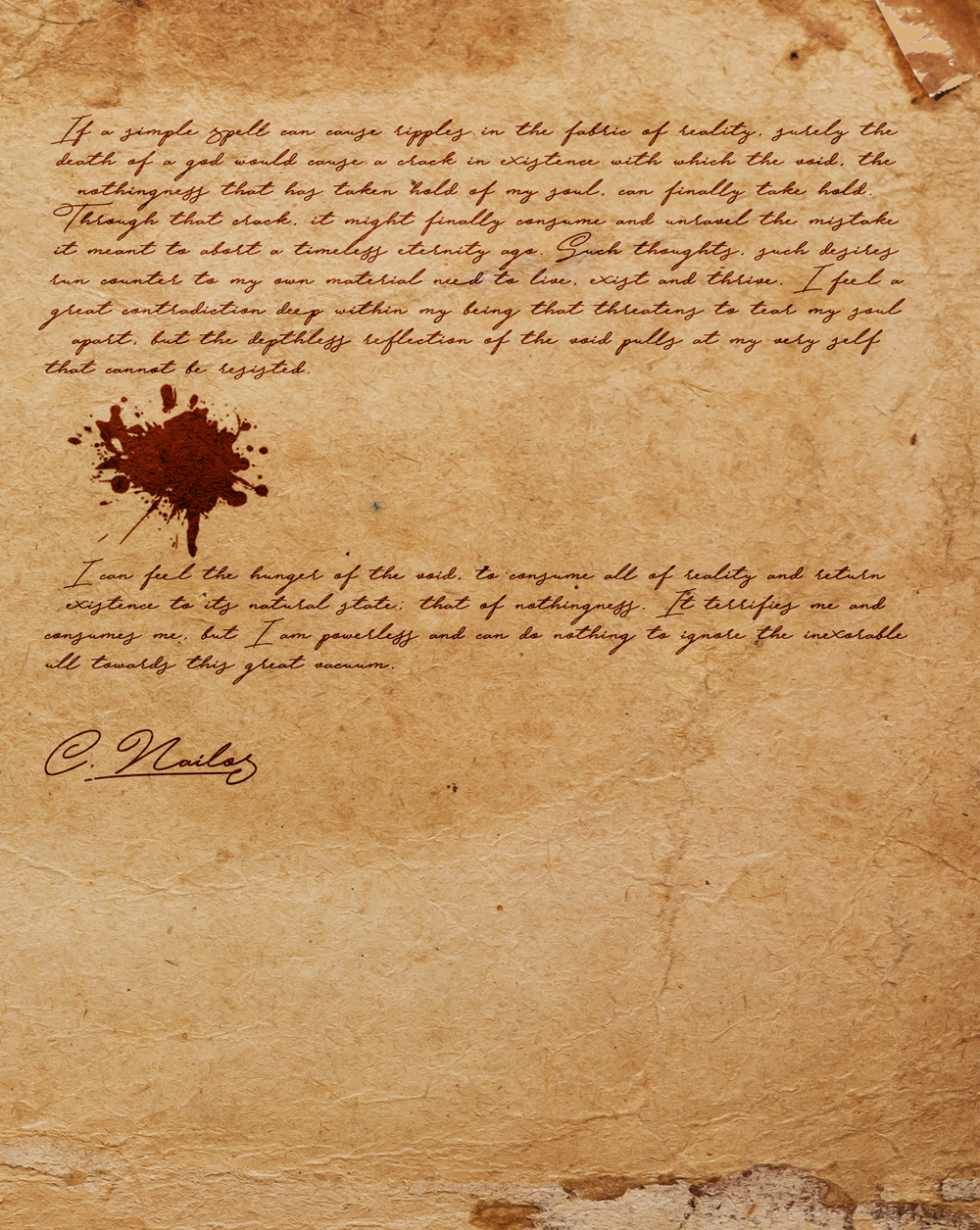 My own internal reflections and meditations continue to bear terrible fruit in the form of further reflection with what I can only refer to as the void beyond existence. My training and studies in the monastery of Shar bore unexpected fruit nearly 200 years ago (as measured on this plane of existence). The wizards and monks there explored meaning and purpose with endless devotion to this meaningless goddess of darkness. Their droning, mindless prayers belied a greater truth; that this god was no great power, but simply another construct of what we know as existence. Meditating inwards led me to a greater truth; that existence is an aberration, a mistake borne from nothingness, inexorably growing and expanding. As my meditations reached into that endless void of non-existence I felt a presence, a consciousness, if anything can be described as such. Certainly, the confines of my corporeal being is what defines my perception of this presence, as a presence or consciousness at all. The horrible understanding of its true nature is undoubtedly beyond my own abilities as it must be beyond the perception of any being or creature of existence.

Even more horrifyingly, as I continued to extended my own consciousness towards the void, I felt an endless and dark reflection push back upon my mind. It was as impossible as seeing yourself in the reflection of a calm pool in a darkened cave, yet seeing and perceiving it all the same, multiplied across non-eternity. No, that’s incorrect, it’s as though pieces of existence cease to be and are violently thrust back into being. My own feeble mind fails to properly comprehend or explain this horrible phenomenon, if such a thing is even possible.

Imagine a shadow, not as as the absence of light, but as the absence of all things. This weird comprehension, and the application of it, is what led to my eventual banishment from the monastery. My assertions that existence itself is nothing but a vile afterbirth threw the feeble minded monks of the Shar monastery into fits of hysterics, driving me from the very place I had been raised. Leaving the Shadowfell itself was no difficult task, as the separation between that plane and the material one has always been tenuous, and my own new understandings of the void let me slip from one to the other without undue strain.

That departure was some fifty years ago and I’ve had ample time to explore and examine the material plane. The needs of my body necessitate I take on meaningless tasks in order to feed and maintain myself so that I may further understand the true nature of the void which touched the core of my being so horribly. I have taken to assassination contracts; it suits my abhorrent understanding of the meaningless of existence and “life” and the unique skills my connection, if such a thing is possible, with the void itself have made me more than competent in the grim task.

The inhabitants here have an unusual fear of arcane magicks. Such powers unleashed in this plane cause chaotic and unnatural occurrences in localized areas around their use. This chaos is a portent to the unravelling that reality must be exhibiting as the void begins to re-exert it’s non-self upon it. If the use of these magicks cause such small ripples in the fabric of reality, it’s my understanding that larger releases of powers could set into motion the destruction of the fabric of reality itself. Against my deepest desires, my sights have been set upon the most horrid and difficult of tasks. The denizens of this plane, as in the Shadowfell, worship beings they perceive as gods. But my own internal reflections have shown me the dark truth; that these gods are as insignificant beings as all other things. However, the power they wield within these plans of existence, and the outer planes they themselves inhabit cannot be ignored.

If a simple spell can cause ripples in the fabric of reality, surely the death of a god would cause a crack in existence with which the void, the nothingness that has taken hold of my soul, can finally take hold. Through that crack, it might finally consume and unravel the mistake it meant to abort a timeless eternity ago. Such thoughts, such desires run counter to my own material need to live, exist and thrive. I feel a great contradiction deep within my being that threatens to tear my soul apart, but the depthless reflection of the void pulls at my very self that cannot be resisted.

I can feel the hunger of the void, to consume all of reality and return existence to its natural state; that of nothingness. It terrifies me and consumes me, but I am powerless and can do nothing to ignore the inexorable pull towards this great vacuum.